The Juno Awards is an annual event that honours and showcases Canadian artists. This year, the event was held at the Air Canada Centre in Toronto, Ontario on March 27 and marked the 40th anniversary of the show.

I had the amazing oppourtunity to attend The Juno Awards red carpet where I met great Canadian talent including Shad, Jesse Labelle, Tanya Kim, Sarah McLachlan, Johnny Reid, Elise Estrada, Neverest, Classified, Sam Earle, and Charlotte Arnold. Other talent on the carpet included host Drake, Shania Twain, and deadmau5. However, I think that the cherry on top of the red carpet event was the surprise performance from Danny Fernandes and Shawn Desman.

I was front row but that didn’t come without hard work – I stood in the freezing cold for over 7 hours! However, the excitement of the crowd and knowing that we were about to meet our favourite stars was enough to keep us warm. As well, I was lucky enough to be given free tickets to The Juno Awards show which was a fantastic production! What a night!

As I was viewing pictures from the awards the next day, I came across myself! My picture with Degrassi’s Munro Chambers (above) was featured on MuchMusic’s web blog: .

Can’t wait until The Juno Awards next year!

Hey, it’s Angela. I started writing when I was 7 and I am still pursuing my dream and loving the ride. I hope you enjoy this site which includes samples of my writing. I also enjoy photography, graphic design and web design.

I’m supporting a wonderful charity, BLESSINGS IN A BACKPACK (re-branded as ISTHMUS in Canada as of summer 2017), which helps to feed hungry children in our community. Learn more about it on the Blessings in a Backpack/Isthmus page, located in the Giving Back section.

I feel so blessed and I want to thank everyone that’s been there along the way to support me, including my parents, editors, friends, and family.

Who knows what’s ahead? I can hardly wait for the next part of my journey. 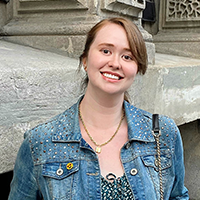 Hey, I'm Angela! Based in Toronto, I'm navigating this fancy, fine and beautifully complicated world through writing, travelling, taking too many photos (RIP camera memory) and seeing ALLLLL the concerts (and travelling for those too).

Get comfy, get to know me and let's be pals!

Another #Lollapalooza down and done ✅ I don’t

Yes, that is me in the new #GreenDay #TikTok. 🫣